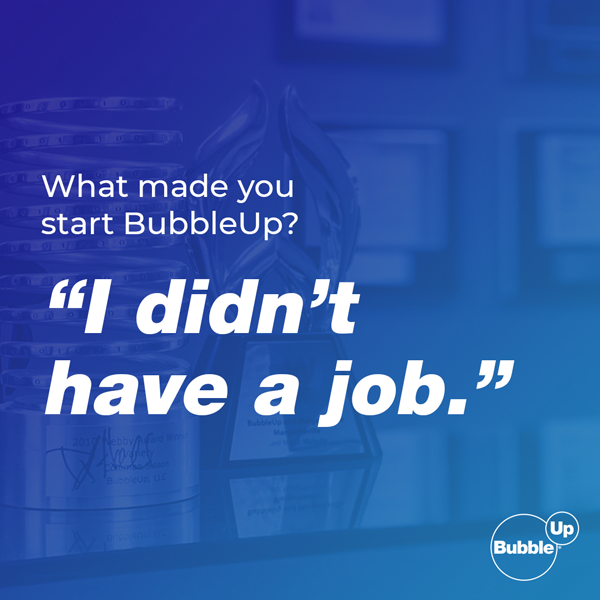 We recently sat down with BubbleUp CEO to get the inside scoop on the company, when and how it was founded, what it looked like in the early years, and how it has transformed into the full-service, digital marketing agency it is today.

The question that sparked the conversation was simple: “What made you start BubbleUp?” And so was the answer—at least initially. “I didn’t have a job,” he said. Fair enough. But, of course, that wasn’t the whole story.

BubbleUp’s CEO, Coleman Sisson, had an impressive background in enterprise computing prior to starting BubbleUp, coupled with the ambition required to create a business and make it successful. Back in 2003, iTunes had just come out, and the internet was starting to explode, but music hadn’t even made its way to smartphones or Windows computers yet. Additionally, record labels weren’t providing everything fans wanted or what artists envisioned.

Sisson saw this void within the market and the demand from fans to have more personal access to artists. Sisson knew there was an opportunity to help artists connect with their fans directly. He, along with close friend Lee Totten—BubbleUp’s Chief Creative Officer—had a goal of creating a system where, every time a fan searched an artist’s name online, it would direct them to the artist’s website. That site would then serve as a one-stop-shop for fans to purchase merchandise as well as have access to artist information.

Initially, Sisson and Totten focused on online store systems and later on developing fan clubs for artists. The next phase included selling song downloads for 99¢ (but they quickly discovered they couldn’t make a solid living with that business model). With a deeper understanding of fans’ desire to have access to exclusive concert tickets, they built a ticketing system through the fan clubs–showcasing their ability to quickly adapt to what is useful and beneficial for customers—in this case, fans—and creating business channels based on what the market needs.

During our chat, Sisson mentioned, “When someone says ‘Can you do this?’ We say yes, and we figure out how to do it. And do it well.” He recounted one scenario of when a large funeral home company inquired about developing a marketing application, and that mantra was never more important. It was one of countless times BubbleUp worked and progressed to meet the market’s needs. As the company grew, it evolved even more into the marketing landscape, fully embracing it as the internet became even more sophisticated. As Sisson said, “We’re a very technical company, and as marketing tools got more technical, it became advantageous to be in that pool.”

We closed out our conversation by asking him: “What is something about your entire experience with BubbleUp that stands out to you over anything else?” Our CEO was quick to answer: “The willingness to pivot. We’re very good at going where the market is. Having the ability to go into areas that are difficult for most people, changing directions quickly, and meeting a need in the market—no matter how technical or challenging it is—has been amazing.”

And with that, BubbleUp evolved from being a small project, and the vision of two close friends, to the award-winning, full-service, digital agency we know today.